I (re)found the shortbread cookie recipe* I use finally! It's on a website called Fifteen Spatulas, by a baker named Joanne Ozug. After briefly looking through her bio and some of her other recipes, I think I'm going to try other recipes she has up. :)

I like this recipe a lot and have found that it is pretty forgiving if you make small mistakes or if you're lax with measuring accurately. I've tweaked it a bit for my laziness and available household tools. We don't have a pastry bag and the nozzles on my cookie press are too small, so I don't put the milk in because it makes the dough a little too wet for me to use the cookie press. Instead of adding the milk, if you're willing and able to get your hands dirty, you can knead the dough until it comes together. The butter will melt a bit with the warmth of your hands which makes it a bit more cohesive but not too much.

If you sift in the powdered sugar, as well as the flour in 1/2 cup additions later on, you also don't have to worry as much about the dough not coming together or getting clumpy in the mixing stage. We don't have an actual sifter, so I use our fine mesh colander and push any clumps through with the back of a spoon. The dough kind of feels like that kinetic play sand before it comes together. I think it's neat. 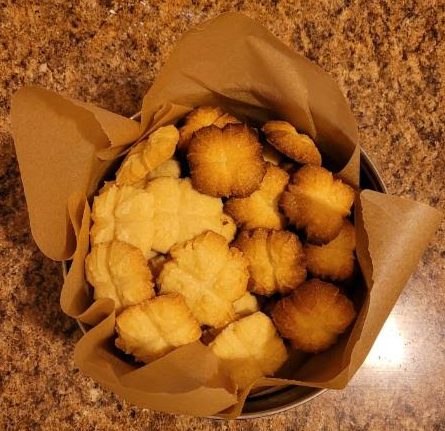 I usually just divide the dough in half and make two logs that I cut 12ish cookies each out of with a sharp knife (for a total of roughly 24). On Wednesday I used a cookie press I received as a present many years ago to make them a little more festive. Some of the nozzles were stuck in the storage compartment and I hadn't thought to get it prepped ahead of time, so I didn't have many shapes to choose from. The four-pointed star seemed cute to me, so that's what I used. Of course, I forgot not to put any of the trays right above the burner, so two of the trays burnt. Ah well, those can be dunkers. I ended up with almost 60 cookies, which makes me think when I normally make them I make them way too big.

My partner has stronger hands than me and so they were able to dislodge the other nozzles when they got home without breaking the plastic edges of the compartment. I'm going to store them differently so that it doesn't happen again.

My family used to buy one large tin of assorted cookies to share during the winter holiday season. Sometimes we kept the tin to put other things in. I think it's a trope that people use those tins for sewing kits? My partner and I got a large tin of Swedish gingerbread snaps awhile ago, and we use it as our cookie tin now.

I received my first re-usable pie dish with a lid as a present this winter holiday season. I made my first pastry pie crust from scratch ever, and filled it with French Silk Pie. I forgot how long it takes for this pie to set, so we had to wait until today to have any. The shell was pretty underbaked. I'll bake it longer next time--mistakes are important to learning! I made the whipped cream and added chocolate shavings after we ate breakfast. We had our leftovers from yesterday's Big Meal; my partner fried the ham, I re-heated the potatoes and fried a couple eggs for each of us in butter.

I am looking forward to using the time I have over this following week to engage more deeply in my hobbies.

Thanks for stopping by! I hope you are having a good time, eating food you like and spending time with people you love. Seeya next time.

*I just realized that many of the recipes I use are in imperial units. Here's an imperial/metric conversion page if that's useful for you.